We had a visitor in school to show the pupils some fun science experiments. We learnt about rockets, their fuel source and using thrust for lift off. Small explosions showed the pupils the effects of chemical reactions, and balls and toilet paper demonstrated the effects of aerodynamics.The pupils greatly enjoyed watching and taking part.

For world book day, this year, we dressed as forest explorers and spent time in the common building dens. In the afternoon we planned a story board based around our dens. We then practised acting our stories in the common ready for parents to come and watch.

Celebrating the 100th anniversary of  the end of WW1

Grandparents were invited into school to join in with our First World War centenary celebrations. The pupils stayed in their class groups and cycled through various activities. KS1 enjoyed some dancing, making poppies from paper plates, potato printing and medal designing. KS2 also enjoyed medal designing, making their own poppies and looking at songs from the era.

The newly established eco warriors group has been hard at work tidying the school grounds and the common, including planting in the vegetable beds. The group consists of pupils across KS1 and KS2.

KS 1 visit to the seaside

Hedgehog and Badger class enjoyed a lovely sunny day to Wells to complete their seaside topic. As you can see they had a lot of fun! 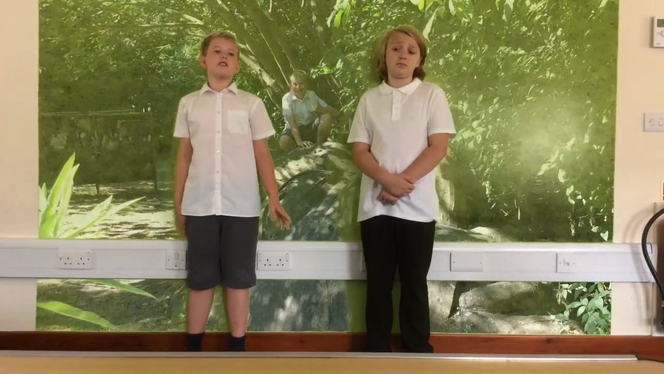 The year 5 and 6's have been looking at persuasive writing during their English lessons. A couple of the pupils have recorded their learning using a green screen app and have made a video about Ashbeach School.

Four pupils from year 5, Mitchell, Cameron, Emma and Chloe, took part in the annual year 5 Cambridgeshire maths challenge. They had to work as a team and answer a variety of mathematical questions. They really enjoyed challenging themselves and came a respectable third place.

Receiving their certificates in assembly.

The Ashbeach choir joined many local schools on Saturday 28th April, to sing at the Amelia Martin concert. It was a lovely evening hearing all the children sing, with a great community atmosphere.

During World Book Day the children shared stories in their houses. It was a lovely opportunity for older and younger children to share some of their favourite stories.

Funky Monkey from One Leisure in Ramsey came to talk to the children today about water safety and drowning prevention. He then joined the children in the playground and as you can see thoroughly enjoyed himself.

Foundation class had a 'Pirate Day' where they all dressed up as pirates and made some tasty looking fruit salad.